I like the band name, it's anti-perthness. Well that's how i read it anyway, which possibly says more about my state of mind than anything much else. Get me out of this town! I got dragged into being a fan of this outfit from a number of directions. For one, my colleague, friend and wisecracking technolectual filmmaker Sebastian Craig shot their clip. 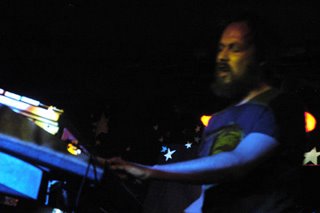 Two, Ronan's work i been a fan of for years, since my days doing live-to-digital recording at the ramshackle Initiation Studio (don't get me started). Ronan's recent bands include Seahorse Radio and a stint in Futurist, a nominally three-piece jazz-crazed group that performed intermittently at the Flying Scotsman on Friday nights. Fender Rhodes, Fender Rhodes, drums and Fender Rhodes was the line-up if i remember correctly. And the Futurist stoned party at the Italian drummer Dan's, where he fed the masses with what seemed like only a token amount of pasta, chilli and oil. Dan could walk from here to South Perth without using the bridge, such is his godlike stature as a cooker of pasta. Futurist noodled through the kind of anti-structure numbers with bouts of dynamite drumming that would sporadically take your mind off even beer. They were cool and had interesting email invitations to gigs, with a kind of stylised trotskyist slant ... and the music, well, Zappaesque comes to mind, but so does Tortoise (Tortoisesque?) And reason to get dragged into fandom number three, vocalist Sascha Ion's work heard from the days (ah, the good ole days) when she was playing around town with Spank. I think i was bassist for metal alloy outfit Botticelli's Angel around that time. I mean, i'm pretty sure i was bassist for them, but not sure if it was round that time... oh, you know what i mean. Heard good things about the spanksters, heard their work, but never actually saw them play. Solipsistic? Moi? 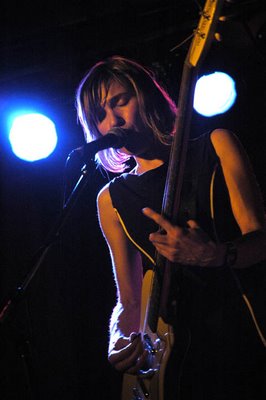 This is not a gig review. This is an excuse to publish my photos, let's face it. Though the gig was pretty good. Friday night, Mojo's (the bar formerly known as The Stoned Crow, where flatmate Jo19 cooked the Sunday roasts back in the 80s - never knew that until very recently) where tonight i run into ex-Code Red Art work colleague Brett Todman (the artist formerly known as Roy), Poon's Head recording guru Rob Grant, Alex from Kill Devil Hills, former Cinema Pragueist and current Rice guitarist George Kailis doing a brilliant job on the mixing desk, and the documentary producer Nathan Jones who is doing a film on the modern day pirate and treasure hunter Captain Mike Hatcher - but more on that later.
Now i'm not convinced the vintage Fender Rhodes instrument really stands up to the punishment dished out by a postmodern touring act. Especially one where the keyboardist is inclined to play particular chords with his right foot, and jump about on the keyboard. Ronan, Ronan. Wrestling with technical problems onstage i always find entertaining. In the way one finds any unfolding disaster entertaining that doesn't involve oneself or any of one's immediate family. Glad that's not me, i'm thinking, having to juggle one instrument while pulling the lid of another to find a faulty connection and keeping on playing while desperately trying to remember where i left that third hand. But what a fat bass sound Ronan gets out of that keyboard! Yeah, they kick a bit of arse when all is functioning, and Sascha's got a mean big guitar sound and a solid gold look. And her voice - hmm, that's one of the good things i used to hear about Spank. Flighty, melodic, beautifully idiosyncatic ... do i sound obsessed?

Check at Ronan's AWESOME webdesign at one horse town then go buy the tshirt. They rock.

Pay a dollar? How about that twenty. 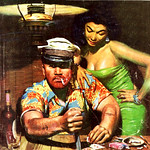 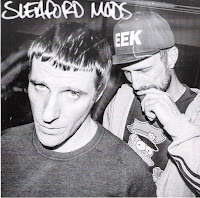